What if Principal Rooney came across as a really cool guy? What if he had just smiled and said, “No worries Ferris. Take the day off and enjoy yourself,” would you still enjoy the movie just as much? What about if the Rocky movies only focused on Rocky himself and we didn’t get to know any back stories at all on his opponents? Maybe he’s even friends with them. Would we still love to watch? We love a good bad guy. Why? Because we value putting a face to evil and then seeing it get its comeuppance. From the only-sort-of bad guys like Swiper from Dora the Explorer to the psychotic sickos like Buffalo Bill from The Silence of the Lambs, these ambassadors of evil not only help us to recognize evil and hate, they make us love and cheer on the protagonists with greater enthusiasm.

In the 80’s, Hulk Hogan was made into a worldwide superstar. And, aside from his promoters, it was because of “heels” like Roddy Piper and Andre the Giant that got him there. Without them he was just a muscular, tanned, patriotic, tall guy with hyperactive charisma and a weird haircut. His charisma was off the charts, but what good was it without the henchmen?

I will concede that this list MIGHT not be definitive, seeing as my last group of lists were understandably debatable. But I’m rather impressed with it if I do say so myself. These, I believe, are the best bad guys to grace the silver screen. Their ability to embody evil and make us love the hero all the more earns them their spot. And one more thing… seeing as both Darth Vader and Heath Ledger’s Joker could each easily grab the number one spot with ease, I’m taking them out of the running completely. Consider this the Honourary Darth Joker’s top 15 Movie Goons:

15. The Wicked Witch of the West (The Wizard of Oz) — My heart thumped watching her as a kid. The “I’m melting!!” scene is so simplistic, but for me it was sweet victory.

14. Lord Voldemort (Harry Potter series) — I think the weird teeth and chopped off nose alone gets him on this list. Creepy.

12. The Evil Queen (Snow White and the Seven Dwarfs) — The cartoonists somehow managed to animate derision and disdain flawlessly.

11. Annie Wilkes (Misery) — All through this movie all I could do was picture myself in that situation and imagine the horror of it.

10. The Sensei of the Cobra Kai (The Karate Kid) — Oh my this guy is evil. I had no idea what sweep the leg was, but he says it in such a way that makes the 14-year-old me yell at the TV. The bratty blonde kid looked like St. Francis of Assissi after that.

8. The Alien (Alien) — There is something so terrifying about this monster. It looks sleek, venomous, vicious, even merciless. 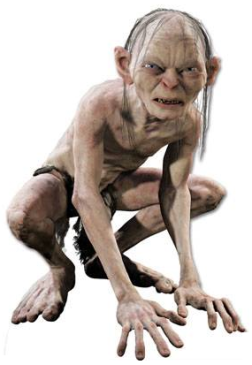 7. David (The Lost Boys) — He was like the big bully at school just turned into an adult, and he can fly.

6. Gollum (The Lord of the Rings series) — He’s perfect: he’s got the evil look and sneers, the unforgettable voice, the scheming ways. He’s even got the ugly. Not totally sold on Sauron as a bad guy, though. Just not visible enough for me.

5. Hans Gruber (Die Hard) — Alan Rickman does the perfect frustrated bad guy. He’s psycho, of course. But he reacts superbly to his plans getting thwarted. This movie is the perfect example of the good guy being loved already, but is over-the-top loved because of his nemesis.

4. Mr. Potter (It’s a Wonderful Life) — Once again, I must show admiration of SNL’s portrayal of this movie’s alternate “lost” ending.

3. Col. Hans Landa (Inglourious Basterds) — No one can mesmerize you and terrify you quite like Christoph Walz can as Landa. Gives me goose bumps just thinking about it.

2. Nurse Ratched (One Flew Over the Cuckoo’s Nest) — It’s hard for me to think of another villain in movies that can bring out the emotions in audiences like Louise Fletcher did in this movie.

I have to say that as I look at this week’s nominees, Gary Oldman as Stansfield rises to the top as the best bad guy. Richard Schickel of Time called him “divinely psychotic.” Therefore…

Congratulations Leon: The Professional. This is your week.

Best Actor: Clint Eastwood. My mother had it right. Many movies pale in comparison to his. This one is a classic and is my favourite western film.

Best Quote: “If you work for a living, why do you kill yourself working?” – The Good, the Bad and the Ugly

It’s ok in my opinion to hate the bad guys in movies. That’s what movies are for. Helps us get it out. But in real life, we’re all broken human beings.

“There is some good in the worst of us and some evil in the best of us. When we discover this, we are less prone to hate our enemies.” — Martin Luther King Jr.

“I object to violence because when it appears to do good, the good is only temporary; the evil it does is permanent.” – Mahatma Ghandi

4 thoughts on “I don’t want to fight you. I just want to watch you get beat up.”