When it comes to climate change, it can be difficult to know what’s real and what’s not. Do we trust those who tell us there is a dangerous and imminent problem that could have disastrous affects on our descendants, or do we trust those who warn us of spending unnecessary time and money on something being force-fed to us by alarmists?

Whether or not we realize, we all do have an established stance on the subject, and therefore, every one of us fits into one of two categories: 1) those who believe there is a real problem and 2) those who don’t believe there is a real problem. You may believe yourself to be more middle-of-the-road (e.g. You don’t believe all the hype but you also think we should be responsible in taking care of our planet.), but at the end of the day, either you are concerned about climate change or you are not. 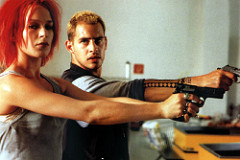 Now Run Lola Run can actually help us here. In this film there are several different scenarios given to the audience. It doesn’t say which one is real, we choose. For me, when choosing what to believe in situations like this, I have found “Occam’s Razor” to be a very helpful principle in problem solving. It simply states that the simplest answer is usually the correct one.

So, in this case, which scenario below seems more likely to be true?

Now I can envision either one of these being true. Given the opportunity to lie and deceive in an effort to make money is a common pit we humans fall into. However, in cases like this where it’s hard to know what to believe, I like to make use of the Occam’s Razor principle: the simplest solution is probably the answer. And when I do ask that question, it seems obvious to me that option #1 is the clear winner. Here’s why I say this:

This, admittedly, is a bit simplistic. I mean, textbooks are written on the subject. But this is my conclusion after running through the scenarios like Lola. And I must admit that after such a short run I’m already out of breath. So… what say you?

Congratulations Run Lola Run. This is your week.

Best Quote: “I want to tell you with my last breath that I have always loved you. I would rather be a ghost, drifting by your side as a condemned soul, than enter heaven without you. Because of your love, I will never be a lonely spirit.” — Li Mu Bai in Crouching Tiger, Hidden Dragon.

If you’ve read this entire post, thank you. I realize that climate change is a bit of a bore these days, and is quite divisive. But I believe it’s important for us to talk about it, whether we like it or not.

1 thought on “Taking a razor to climate change”