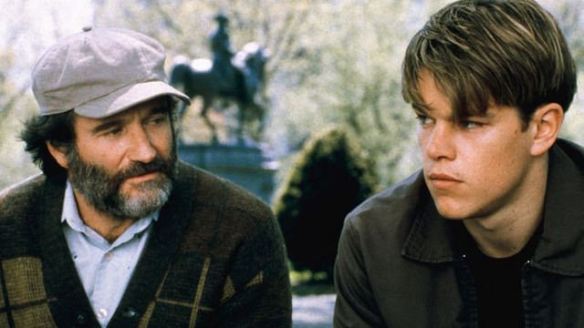 My voice travels. It carries. This has come in handy during the times in my life when I was teaching a large class, speaking to an audience or congregation, addressing a group of teenagers in a gymnasium, etc. However, when I was 10, getting excited telling a story at the dining room table of something funny that happened that day—especially if at the time someone was sleeping in another room—it wasn’t helpful at all. It was a real pain. I used to hate it when I was hushed or told I was too loud. But it wasn’t like they were wrong in saying it. I was loud. Now my son does the same thing with his voice and I want to be annoyed, but I can relate so well. So my response is measured, though usually conflicted and unsure.

Robin Williams was a performer who knew how to be loud. He could even shout an entire stand up routine and we would eat it up. Hearing him in Good Will Hunting speak softly and meaningfully in an effort to help Will makes me jealous. I want to be more like him. Regardless of whether you’re naturally soft-spoken or tend to speak like you’ve got a megaphone strapped to your jaw, there are always times that call for listening, asking questions, and staying calm, collected.

I’ve had someone be Dr. Sean for me many times in the past. I’m hoping I can be that for others. If my voice can carry, maybe it can also carry help and healing. Now that would come in handy.

Congratulations, Good Will Hunting. This is your week. 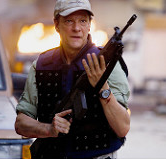 Best Actress: Minnie Driver as Skylar in Good Will Hunting. She was nominated for an Oscar for this performance, which I think was very deserving.

Best Actor: Other than Damon, it’s gotta be Robin Williams as Sean in GWH. But seeing as that movie is sweeping the categories, allow me to give a best supporting shout out to Chris Cooper—a highly underrated actor—in The Bourne Identity. For supporting actresses, I cannot decide between Kristen Wiig and Jessica Chastain in The Martian. They were both awesome in that movie.

Best Quote: “They say once you grow crops somewhere, you have officially colonized it. So, technically, I colonized Mars. In your face, Neil Armstrong!” — Matt Damon as Mark Watney in The Martian.

Speaking of movie quotes, one of my favourite parts of GWH is when Will explains to the NSA, and then to Sean, why he shouldn’t work for them. It’s a great scene, and reading the quote (albeit long) is every bit as entertaining as watching it. So, here it is: 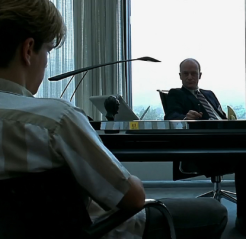 “Why shouldn’t I work for the N.S.A.? That’s a tough one, but I’ll take a shot. Say I’m working at N.S.A. Somebody puts a code on my desk, something nobody else can break. Maybe I take a shot at it and maybe I break it. And I’m real happy with myself, ’cause I did my job well. But maybe that code was the location of some rebel army in North Africa or the Middle East. Once they have that location, they bomb the village where the rebels were hiding and fifteen hundred people I never met, never had no problem with, get killed. Now the politicians are sayin’, “Oh, send in the Marines to secure the area” ’cause they don’t give a shit. It won’t be their kid over there, gettin’ shot. Just like it wasn’t them when their number got called, ’cause they were pullin’ a tour in the National Guard. It’ll be some kid from Southie takin’ shrapnel in the ass. And he comes back to find that the plant he used to work at got exported to the country he just got back from. And the guy who put the shrapnel in his ass got his old job, ’cause he’ll work for fifteen cents a day and no bathroom breaks. Meanwhile, he realizes the only reason he was over there in the first place was so we could install a government that would sell us oil at a good price. And, of course, the oil companies used the skirmish over there to scare up domestic oil prices. A cute little ancillary benefit for them, but it ain’t helping my buddy at two-fifty a gallon. And they’re takin’ their sweet time bringin’ the oil back, of course, and maybe even took the liberty of hiring an alcoholic skipper who likes to drink martinis and fuckin’ play slalom with the icebergs, and it ain’t too long ’til he hits one, spills the oil and kills all the sea life in the North Atlantic. So now my buddy’s out of work and he can’t afford to drive, so he’s got to walk to the fuckin’ job interviews, which sucks ’cause the shrapnel in his ass is givin’ him chronic hemorrhoids. And meanwhile he’s starvin’, ’cause every time he tries to get a bite to eat, the only blue plate special they’re servin’ is North Atlantic scrod with Quaker State. So what did I think? I’m holdin’ out for somethin’ better. I figure fuck it, while I’m at it why not just shoot my buddy, take his job, give it to his sworn enemy, hike up gas prices, bomb a village, club a baby seal, hit the hash pipe and join the National Guard? I could be elected president.”

2 thoughts on “Troy! Keep your voice down!!”